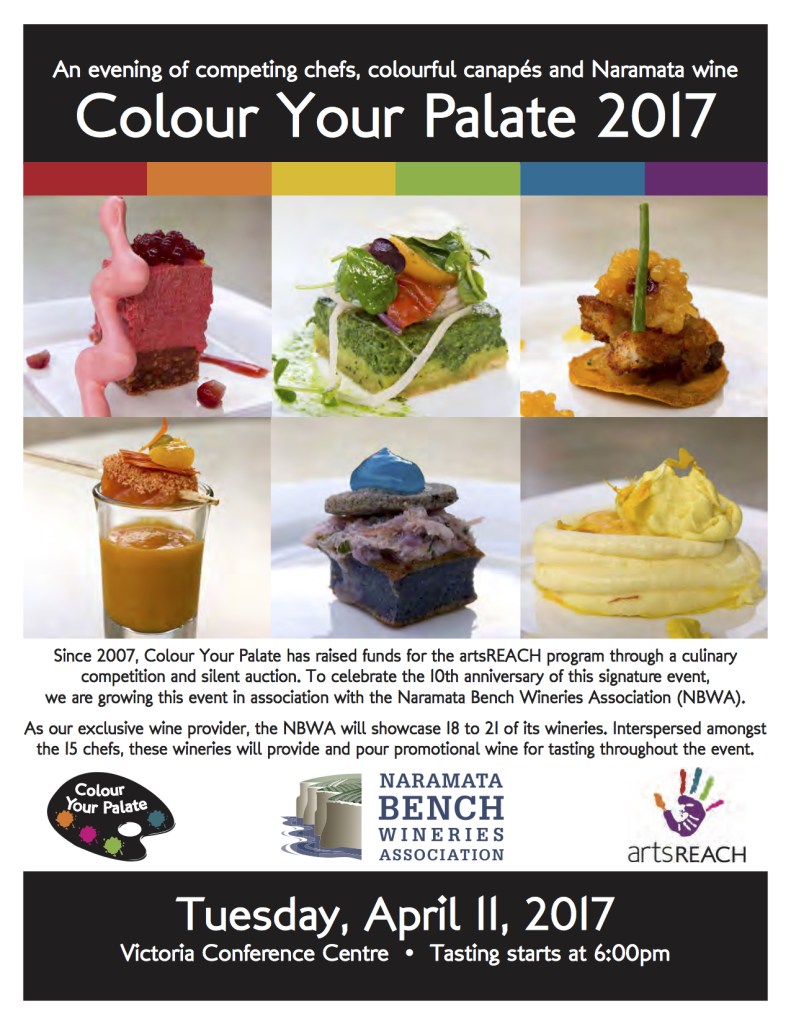 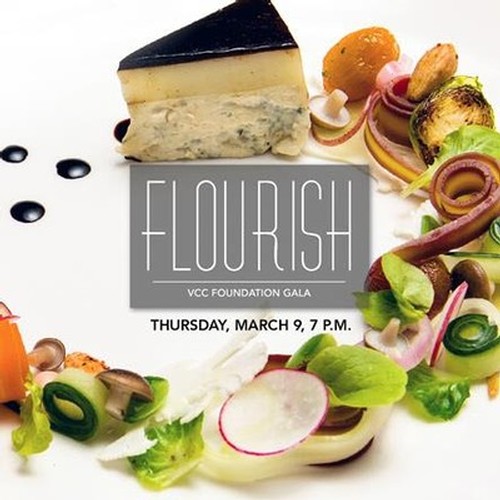 Join us March 9th at  "Flourish" a food and wine tasting event in Vancouver with food creations from high profile VCC Culinary Alumni Chefs and renowned wines from NBWA wineries. 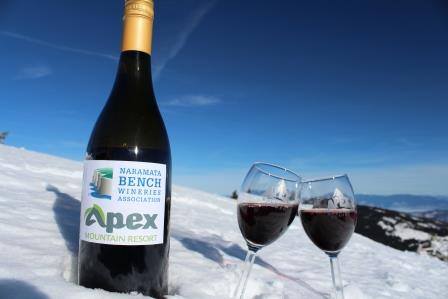 Vertical & Vintages Apex Mountain Wine Festival, March 4, 2017.  A fun-filled weekend full of wine, skiing and friends. Visit the website Apex Resort and get all details. We will be there pouring along with our fellow Naramata Bench wineries.

The Annual Vancouver International Wine Festival is quickly approaching. Each year the festival highlights one country for the ten day event. This year is very special as "Canada" will take the main stage! Visit the Vancouver International Festival website and get a full breakdown of the wine tastings, wine paired dinners and seminars available throughout the ten days.
Tightrope Winery will be pouring a selection of our portfolio during the public tastings, Feb. 17-19. We hope to see you there!

From the thousands of contenders he tasted this year he ranks the standouts, many of which sell for less than $30 a bottle - November 11, 2016

THROUGH THE COURSE of 2016, I’ve tasted thousands of wines from throughout the Pacific Northwest (and around the globe, for that matter).

Knowing I’ll be producing this year-end list, I think about wines that really stand out. I tasted the No. 4 and 5 wines on this year’s list in the first quarter, and each stood out in my mind for the entire year, both for their clarity as well as purity of fruit.

The judging, held at the historic Columbia Gorge Hotel, began Wednesday and concluded Thursday afternoon. The Invite, as it’s known, is unique in the United States, as it is the only wine judging in the country in which the judges nominate the wines they want to have judged. - October 6, 2016

This is the 16th Anniversay of the Awards. And the status of the year's judging is record-breaking. Over 1500 wines were entered from 230  wineries, a testament to the growing number of wineries in the country, and the faith in these awards as being a way to showcase and benchmark our wines. - July 16, 2016

Results of the 2016 National Wine Awards of Canada

“Wow, 2015 was not an easy year for making white wines,” Palencia told Great Northwest Wine. “This award speaks to the quality of the vineyards.”

Palencia used grapes from Spanish Castle and Evergreen Vineyard, both owned by the Milbrandt brothers. Ryan Flanagan is the vineyard manager for both.

Albariño is a relatively obscure grape from the Galicia region of northwestern Spain. It is known for its clean flavors and, thanks to naturally bright acidity, it pairs beautifully with food. Palencia said he enjoys pairing Albariño with such foods as shellfish, ceviche and a variety of Mexican foods.

There was plenty of good news regarding B.C. wineries as the WineAlign 2014 National Wine Awards of Canada were recently announced (disclaimer: I share the head judging duties with my Ontario counterpart David Lawrason).

The Canadian Winery of the Year went to Peller Estates Niagara, which barely eclipsed the 2013 winner, Mission Hill Family Estate. Both wineries grabbed one platinum medal and four gold medals. Next was Nk’Mip Cellars, Jackson-Triggs Niagara and three-time winner Tawse Winery. Quails’ Gate, Road 13 and Stag’s Hollow round out the B.C. wineries in the top 10. You can view all the result here.

What you won’t find broken down in the results are the top 20 rated wines from British Columbia. That list is the essence of today’s column. You can locate these wines first, direct from the winery, then at the usual outlets: VQA stores, private wine shop, B.C. Liquor stores and restaurants.

Some might say it’s the golden age for B.C. wine producers. Prices are at an all-time high, as are aggregate sales.

However, walk into the dry-goods storage rooms of most Okanagan wineries and you have the impressions that selling even a few hundred cases of wine, one bottle at a time, is more than a daunting task. For many, the case numbers are becoming much larger, which begs the question who is going to buy it all.

B.C. wine sales have never been stronger provincially, both in government monopoly stores and the private sector, although the private moniker is almost a joke given that private shops operate directly under the thumb of the monopoly. But what better place to keep your competition if you are the monopoly?

It was hoped wine would be flowing across provincial borders by now, opening new markets, but the powerful, scofflaw, liquor monopolies led by Alberta, Ontario and Quebec have literally ignored the spirit of the federal legislation. No one in Ottawa appears to have the political fortitude to take on the monopolies who are accustomed to wielding absolute power when it comes to booze, and no amount of federal legislation and directives is going to stop them from doing what they please. So far, Manitoba and B.C. have amended laws to allow direct importation of wine for personal use but beyond that not much has changed two years down the road from the much ballyhooed federal legislation.

In the real world, there would be no shortage of plaintiffs ready to take on the liquor monopolies but as a supplier taking your provincial monopoly retailer to court is just too risky a business for obvious reasons. No matter how many federal politicians hail a new era of interprovincial wine sales, the reality is the provinces that count haven’t budged and remain desperate to maintain the status quo of collecting fat tax dollars from distributors and consumers who have no choice but to pay.

Paradoxically it’s not the Canadian wine producers who worry the monopolies but rather it’s their import brethren. Once Costco starts shipping California or French wine to Toronto or Quebec addresses, it’s all over for the monopolies. The great irony is an open market would still result in the same amount of tax flowing to government coffers as well as opening a big Canadian wine market to local producers. But then we wouldn’t need the monopolies would we?

Now, back to reality. Another B.C. Day long weekend is not far off and the best I can say is let’s celebrate the local wines we can buy that the rest of the country can’t. Here’s a quick list of some head-turning B.C. wines I have recently tasted that may just change the way the rest of the free world looks at our wine, long before the rest of Canada finds out. To point out how inane the situation is, most of the wines the monopolies want to stop from being sold across provincial boundaries are not sold by the monopoly. Be sure to check the winery website for the latest in availability.

If you are a cabernet franc fan, two relative new comers River Stone 2012 Cabernet Franc River Rock Vineyards ($26) and the Fort Berens 2012 Cabernet Franc ($26) are knocking it out of the park. Equally impressive given how hard it is to ripen cabernet are the Nk’Mip Cellars 2012 Qwam Qwmt Cabernet Sauvignon ($30) and the Burrowing Owl 2011 Cabernet Sauvignon ($35). Gamay noir the star grape of Beaujolais is finding its feet in B.C., led by a delicious Orofino 2013 Gamay Celentano Vineyard ($23) and a bargain Oak Bay Vineyard Gamay Noir 2012 ($17). Think of them as richer, juicer pinot noirs.

I could go on, and will when the Wine Align National Wine Awards of Canada are released this month but in the meantime it is safe to say whether we like it or not when it comes to wine, what happens in B.C. stays in B.C.